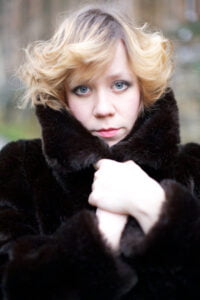 Hanna Tuulikki is an Edinburgh-based artist, composer and performer, working primarily with voice and gesture, to create site-specific performances that unearth an essential relationship with the lore of places. Photography, film, drawing, text, and visual-scores extend the work. Her largest project to date, Air falbh leis na h-eòin | Away with the Birds (2010–2015) investigates the mimesis of birds in Scottish Gaelic song – the vocal composition was performed in the harbour on the Isle of Canna as part of the Glasgow 2014 Cultural Programme, and launched as a digital work with the SPACE in 2015. Other recent works include Women of the Hill (2015) commissioned by ATLAS arts on the Isle of Skye, and SING SIGN: a close duet (2015) commissioned by Edinburgh Art Festival.