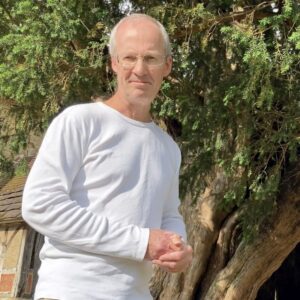 Dr Nick Mayhew-Smith is a researcher and writer specialising in environmental theology, sacred landscapes, and Celtic ­spirituality. He has written several books on holy places in the natural and built environments, starting with Britain’s Holiest Places (2011), which was made into a six-part BBC television series in 2013. His PhD thesis in 2018 was on early Celtic and Anglo-Saxon nature spirituality, and formed the basis for his book The Naked Hermit (2019). He published Britain’s Pilgrim Places (2020) on behalf of the British Pilgrimage Trust, a best-selling guide to sacred heritage. Since then he has been working with the Susanna Wesley Foundation at Roehampton University on environmental projects, leading to the publication of Landscape Liturgies in August 2021, a compilation of outdoor worship and blessing rituals from 2,000 years of Christian history. Nick lives with his wife Anna, an icon painter, and daughter in SW London.