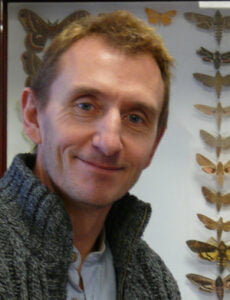 Dave Goulson was brought up in rural Shropshire, where he developed an early obsession with wildlife. He received his degree in biology from Oxford University, followed by a doctorate on butterfly ecology at Oxford Brookes University, before lecturing in biology for 11 years at the University of Southampton. He subsequently moved to Stirling University in 2006, and then to Sussex in 2013. He is the author of Bumblebees: Their Behaviour, Ecology and Conservation (Oxford University Press, 2010), and of the Sunday Times bestseller A Sting in the Tale, a popular science book about bumblebees, published in 2013 by Jonathan Cape. This was followed by A Buzz in the Meadow in 2014. Goulson founded the Bumblebee Conservation Trust in 2006, a charity which has grown to 8,000 members. He was the Biotechnology and Biological Sciences Research Council’s Social Innovator of the Year in 2010, was given the Zoological Society of London’s Marsh Award for Conservation Biology in 2013, and was elected a Fellow of the Royal Society of Edinburgh in 2013.