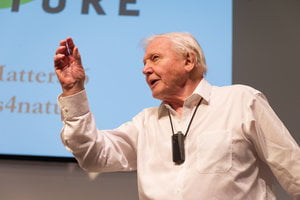 Sir David Attenborough has been a leading figure in British broadcasting since he joined the BBC in 1952, and created his now famous Zoo Quest programmes. Born in 1926, Sir David studied Natural Sciences at Cambridge, before spending two years in the Navy. From 1965, he was Controller of BBC2, a period that launched pioneering television like Civilization and The Ascent of Man, but returned to filmmaking in 1972, and to his collaboration with BBC Natural History Unit in Bristol. From Life on Earth in 1979, Sir David created a succession of remarkable programmes, including Trials of Life(1990), Life of Birds (1998), Life in the Undergrowth (2005), Life in Cold Blood (2007), and Life that Glows (2016), films that have become the benchmark for natural history production. The new home of the Cambridge Conservation Initiative is named for Sir David, and celebrates both his association with the University of Cambridge, and his influence on worldwide generations of naturalists and conservationists, many of who work for CCI Partners in the UK and overseas.