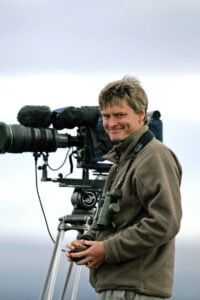 John Aitchison has been filming wildlife for twenty years. He first worked for the RSPB Film Unit, then filmed and produced a number of programmes with his wife Mary-Lou for the BBC’s Natural World series. These included The Amber Time Machine, presented by Sir David Attenborough. John has filmed for many other series, including Hebrides – Islands on the Edge, which was awarded the Best Series panda at Wildscreen 2014. Yellowstone – Winter and Frozen Planet both won team BAFTAs for Cinematography. The Frozen Planet photography team also won an Emmy. John sometimes presents programmes on Radio 4, most recently about the demise of the passenger pigeon. His book, The Shark and the Albatross, will be published in September 2015.