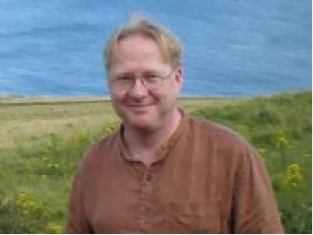 A roomful of faces looked up at us. I felt moved to see them. I am sure we all did. It was also a little bit scary, though all of the faces were masked. For some, this was the first venture back into crowded, convivial space, after nearly two years of restrictions. Here we were, assembled again to celebrate wild nature, listen to experts and debate some of the most pressing questions. Relief and rediscovery were in the air. There was palpable pleasure, though people were cautious, keeping apart as they queued for coffee or hovered over the wonderful bookstall provided by Little Toller. The weekend took some of us through our barriers of hesitancy; it felt like a major step.

In retrospect, we were lucky to hold the event in what turned out to be a brief period of relatively low infection figures. A few weeks later, Omicron was announced and the numbers began to rise once again. But that major step had been taken. In difficult, sometimes disconcerting circumstances, we had made the occasion happen, due in large measure to Mary Colwell’s brave and clear-sighted leadership. Late in the day, Mary found a new venue, after new Covid restrictions had made the first one impossible.

So there we were, in Bath. November sunshine on Georgian buildings. Gulls on the rooves. Morning mist on the river and the canal. Yellow leaves. Kingfishers. Blackberries deliquescing. Bramble leaves torn and tinged red. It was warm enough, still, to sit outside pubs. Nearby, on the Somerset levels, murmuration season was beginning, and, before the conference, Stephen Moss took a party to watch. They were rewarded with a fine show.

Some of the things Covid made us do were good innovations that will last. At the prompting of people still wary of gathering, some of them long-term supporters, we offered live online streaming as an alternative. This we are likely to keep. For most people, probably, nothing can quite match the buzz of the in-person meeting, but many aren’t able to be there, and live-streaming gives us the space for a much larger audience. Another first was the presence of overseas speakers appearing by Zoom. Prerna Singh Bindra, the fearless campaigner for wildlife in India, spoke to us from that country about confrontations between villagers and elephants, and ways of managing those encounters. Laura Jean McKay, in New Zealand, read from her startling, award-winning novel about a fictional pandemic that has the strange side-effect of enabling people to understand the utterances of non-human animals. I am sure we will use this method again.

These zoomed-in contributions were in keeping with the theme of Local to Global. This is the double demand on present-day lovers of nature: the double joy and the double concern. Deep familiarity with a place or a species reveals subtle details and patterns. For many, the solitariness – the escape from the pressures of news, social life, crowded spaces – is a vital part of the experience. Context is what they need to escape, for at least a brief respite. But the climate crisis and biodiversity crisis have to be faced as well. Context is everything. Every loved place is part of a system of interdependencies. Tim Guilford showed this in his talk about seabird migration. New Networks seeks ways of honouring both needs, evading neither, and making the two sides enrich each other. In their panel on plastic pollution, after Cal Major’s exuberant film of her trip down the Severn to monitor plastic waste, Xanthe Clay, Nina O’Hanlon and Jean Sprackland gave us a stark contrast between the domestic scale and the global, accumulating disaster: a contrast also between the innocence of small homely objects and the havoc they cause en masse. Complexities emerged; in some ways plastic is indispensable, and has surprising environmental advantages. In others it is catastrophic.

If we are to combine the immersive and the wide-ranging, achieving dialogue between them, then television will have a leading role. Wildlife documentaries have a remarkable ability to plunge us suddenly into an enclave of drama somewhere on a far continent – and then to contextualize that plunge. On Saturday, Julian Hector, in his final year as Head of the BBC Natural History Unit, gave us some insights into the plans and dilemmas of programme-makers attempting this combination. Their work has so many missions, and must answer so many demands. A piercing example was the footage he showed of an albatross chick that had tumbled out of the nest. The mother’s behaviour – evolved in crowded nesting conditions – is to respond only to chicks that are inside the nest. Those outside are ignored. As the chick struggled to climb back in, the mother bird sat there, impassive. It looked as if the infant was weakening and wouldn’t succeed. Tension filled the auditorium. For the camera crew, the pressure to intervene – just one movement, to help the bird do it – must have been huge.

‘Global’ can also be understood as ‘involving everyone’. How do we live up to that? What are the traditions that have sometimes made people of colour feel uneasy or unwelcome in places where wild nature can be encountered in Britain, and in the established communities of nature-lovers and conservationists? How can we counter-act those traditions and habits? Are we too middle-class, also, in our assumptions and styles? The opening panel, on Friday evening, consisting of Nicola Chester, David Lindo and Anita Roy, in conversation with Seb Choudhury, explored these questions unflinchingly and with subtlety and good humour. Their personal stories were revealing, their comments generous; all three acknowledged the problems, but did so with optimism and wry, emphatic enthusiasm. On Sunday, Nicola Chester followed this up with a reading from On Gallows Down, in which memoir was intertwined with descriptions of the place of the love of nature in working-class culture.

Holly Gillibrand, Kabir Kaul and Bella Lack, forming a panel of young campaigners for wildlife, all under eighteen, brought well-informed passion, and hope that the nature-loving community is becoming more diverse in terms of age, also. Their perspective reached into the next eighty years and beyond, reminding us of the need, when we think of ecosystems, to think of the future and past as well as the global connections and consequences. The theme of diversity of perspective was also strong in the panel on art, which displayed and analysed exquisite work by Sarah Gillespie, Harriet Mead and Rachel Taylor. Maggie Gee, Laura Jean McKay and Ruth Padel all read creative writing that experimented with form and genre – including the weird and the gothic – in response to the strange shifts of scale that we need in confronting the local and global and present and future. Satish Kumar and Jini Reddy talked about different spiritual traditions, and the meaning those traditions continue to find in wild nature; again, these speakers combined personal experience with reflection. Samantha Walton read from Everybody Needs Beauty, a book that explores various ways in which people find contact with wild nature to be good for physical and emotional wellbeing. She approaches these experiences sympathetically and with personal openness, while remaining wary of any attempts to promote them as substitutes for anti-poverty measures or improvements in working conditions.

On Saturday evening, in the Georgian magnificence of St Swithin’s Church, David Gray gave us his first live performance since the onset of Covid. He did so because of his passion for wildlife and conservation, brought out in his conversation with Mary Colwell. The intensity of the singing, in its ascents and crescendos, was extraordinary: these were moments of tremendous emotional power. They seemed to help us release some strong, complex and joyful feelings. We had been through strange times. New Networks was back. We were starting again.

The debates will continue, and some, full of crisis, are only beginning, as we try to find joy in wild nature while facing so many dilemmas. Sunday afternoon gave us a panel on ecotourism, in which two very hard recognitions confronted each other. Nick Acheson explained his decision to give up flying, after ten years of conservation work in Bolivia, Australia and India, part of which involved organizing wildlife-friendly ecotourism in partnership with local people. Now, his conscience would no longer permit the flying. In response, Ian Redmond, after a long and immense career in science and conservation, including his work with Dian Fossey on Mountain Gorillas in Rwanda, said that he saw the argument but was quite sure that without ecotourism trips from the West, always involving air travel, those creatures would now be extinct. Money from this tourism gave local people, facing poverty and rapid change, the option of protecting the gorillas. How can these two urgencies be reconciled? What is the right balance? Our love of nature must find its place by negotiating with all these criss-crossing questions. Then it will have the right to some undisturbed time.

In York, this autumn, the conversations continue. Please come and join in.

All photographs by Hugh Warwick, who has given his permission to reproduce them. Please of course credit him if you use any of them. His gallery for our weekend  can be found on Flickr.

Click on any photograph below for a larger image and click the link above to visit Hugh's gallery of full-size images.

Our opening event on Friday evening 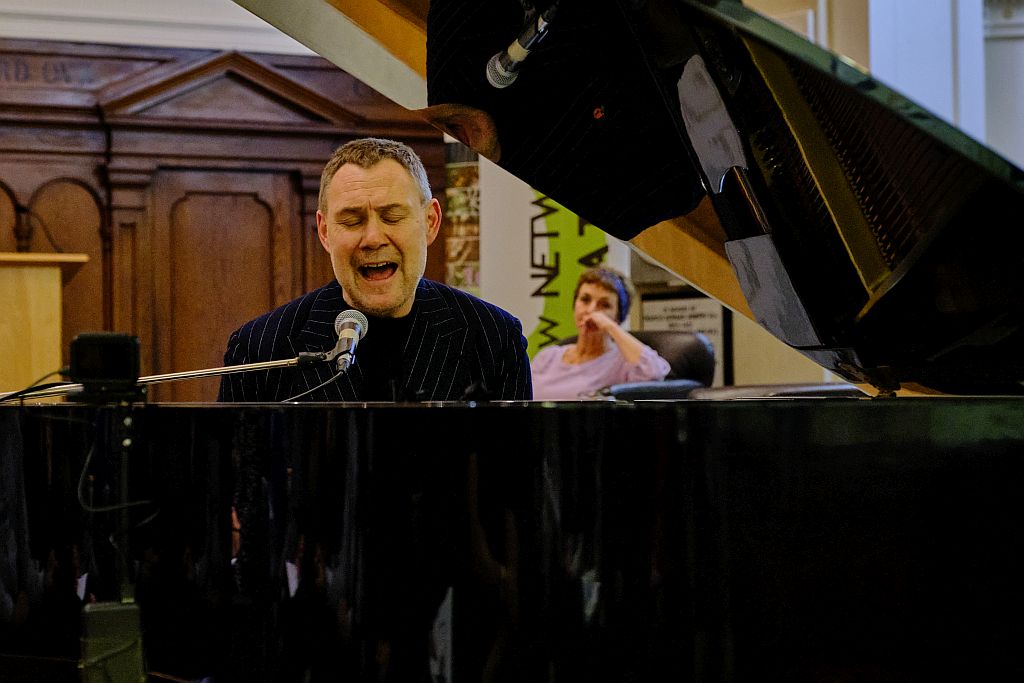 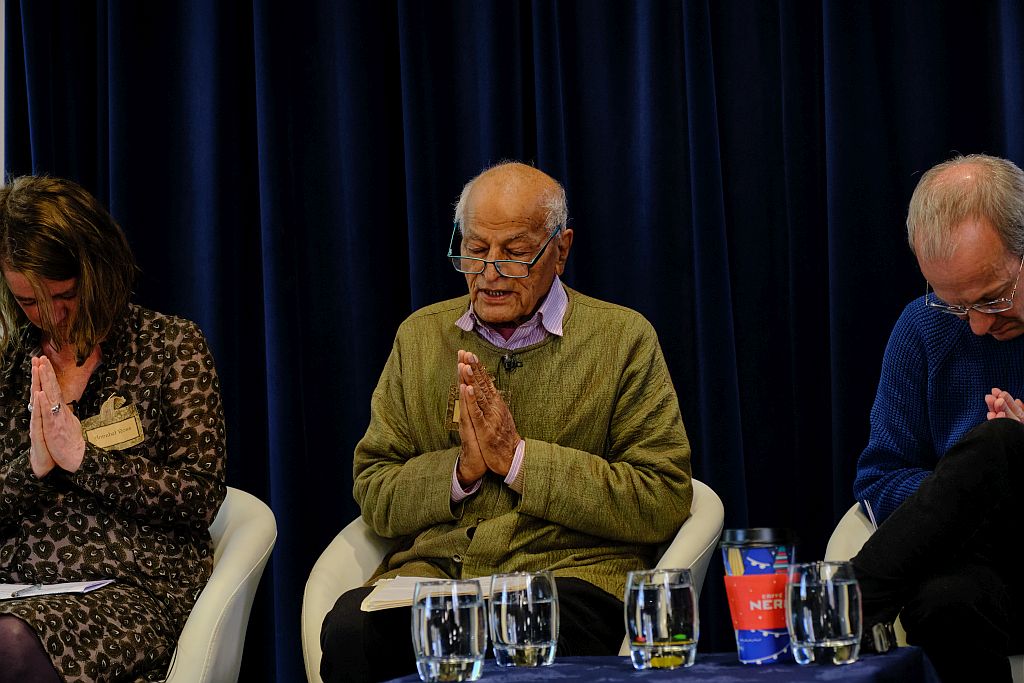 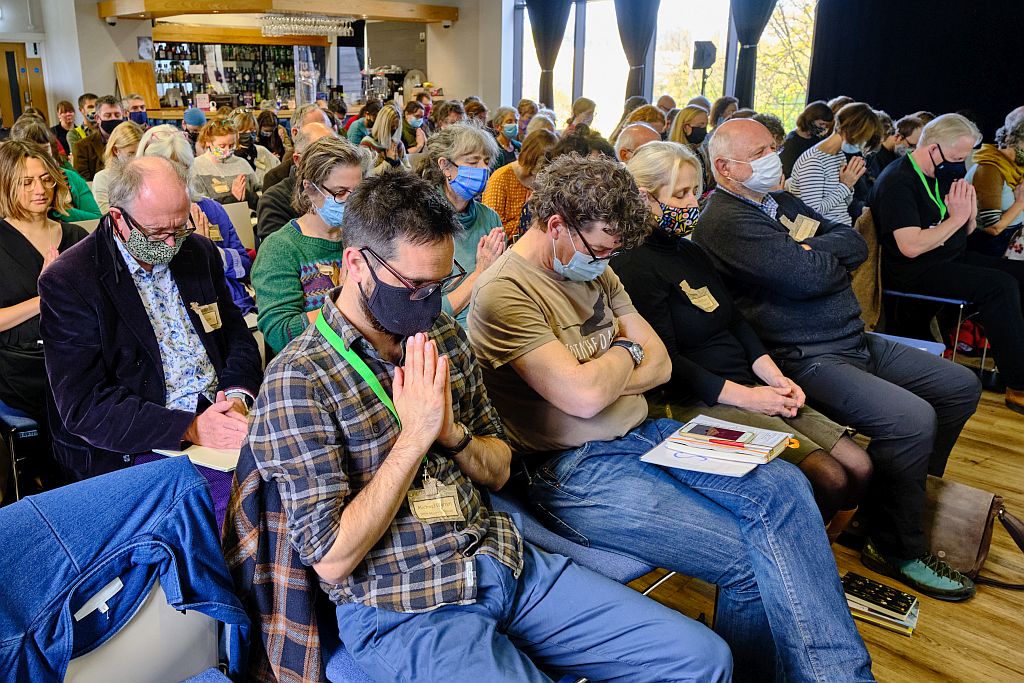 Taking part in the Nature and Spirituality workshop 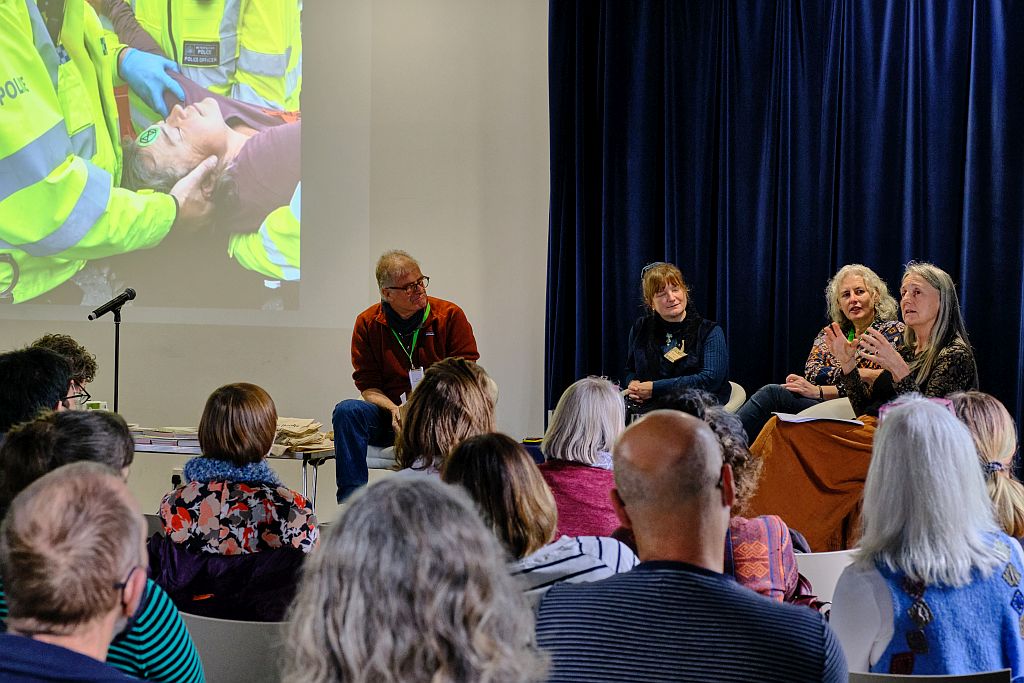 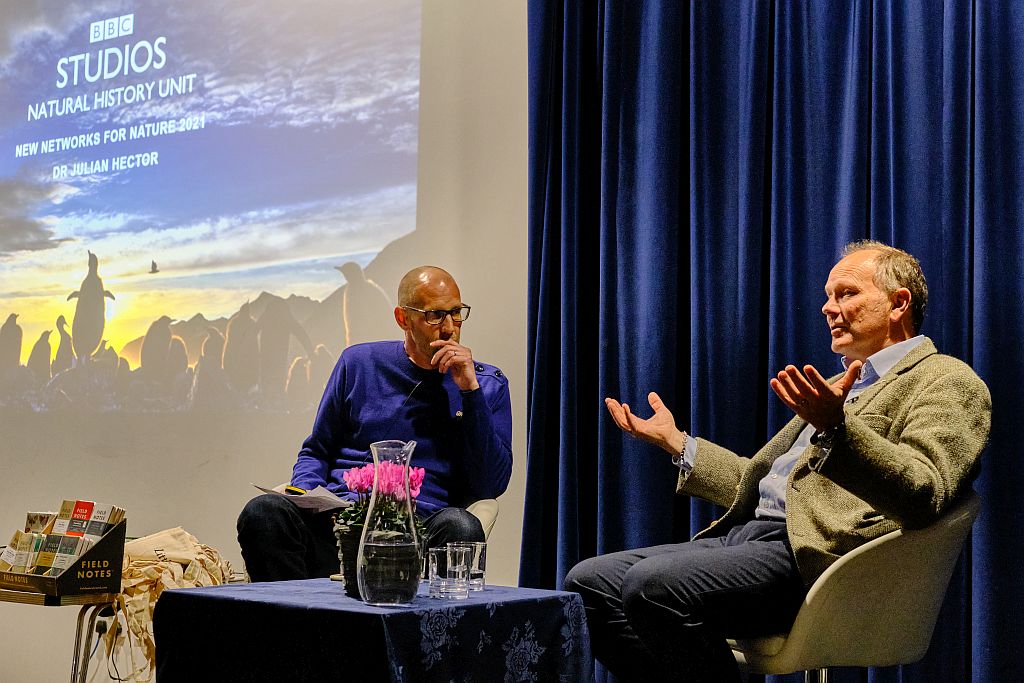 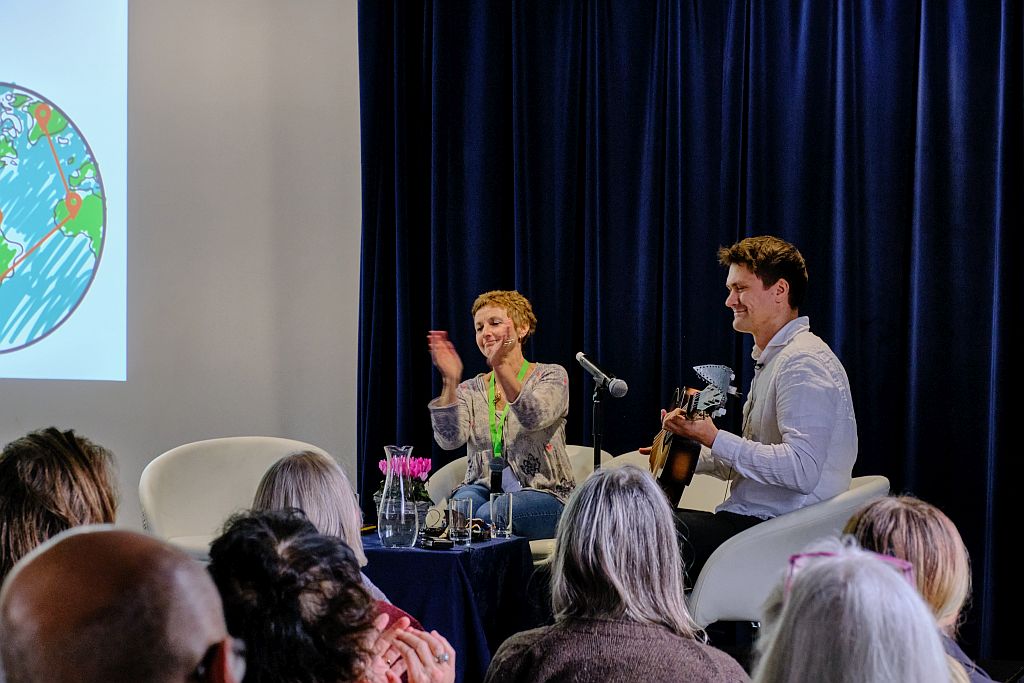 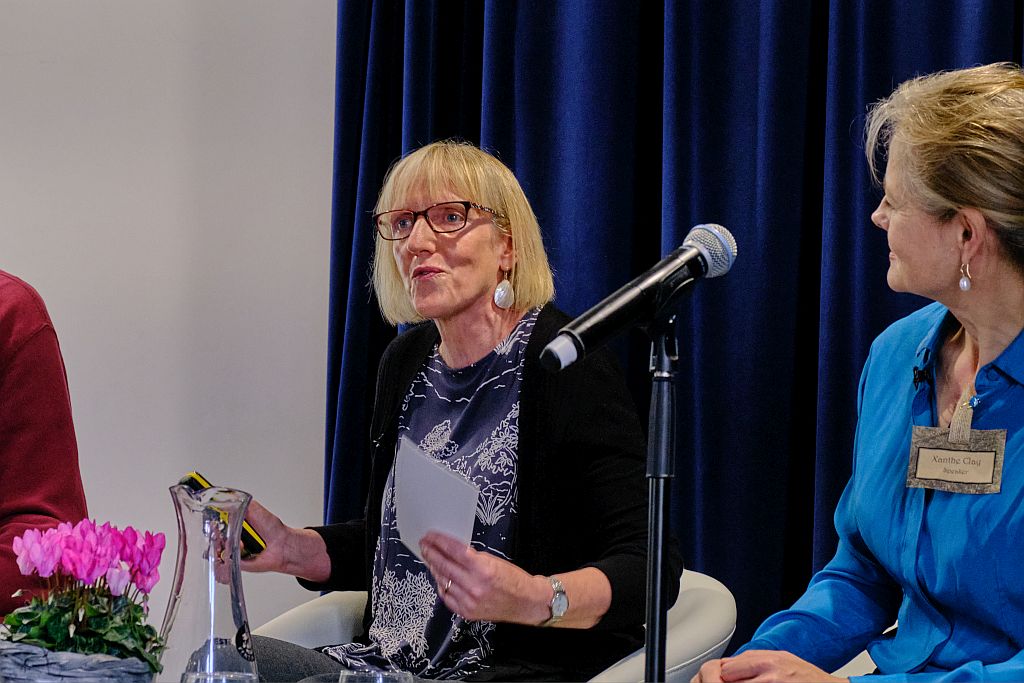 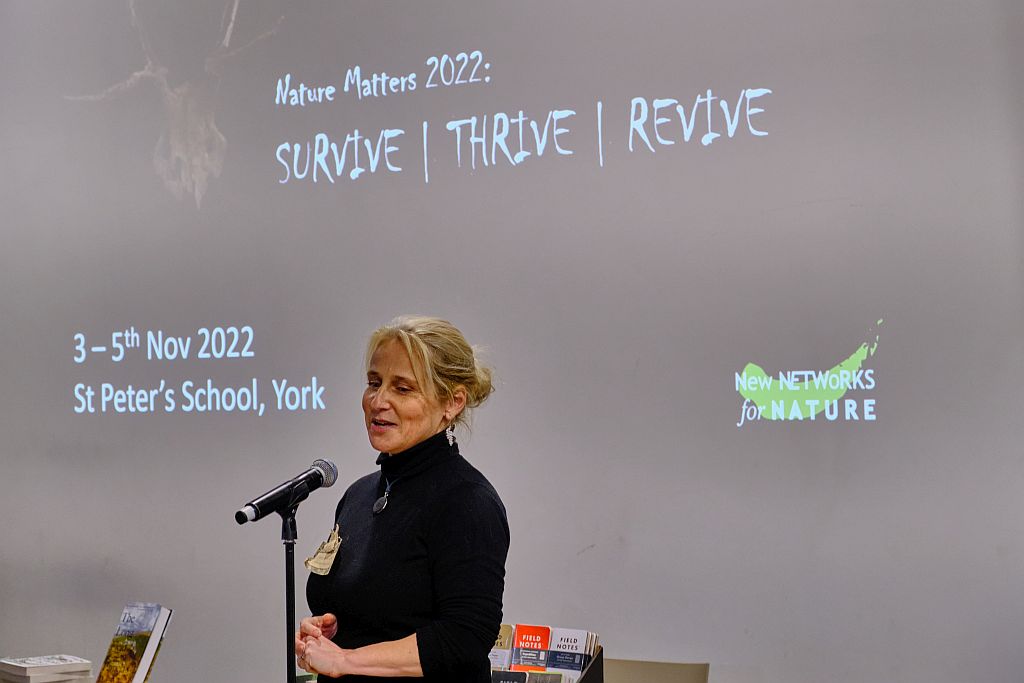 See you next year...!
View The Full Programme for Nature Matters 2021